Shanidar Cave (36º50’ N, 44º13’ E) in the Zagros Mountains of Iraqi Kurdistan, approximately 740m above sea level (Figure 1), has iconic status in Palaeolithic archaeology following excavations by Ralph Solecki between 1952 and 1960 (Solecki 1963, 1971). It is central to debates about Neanderthal burials and behaviour, the origins of the Upper Palaeolithic and issues of Neanderthal–Modern Human interaction and succession. 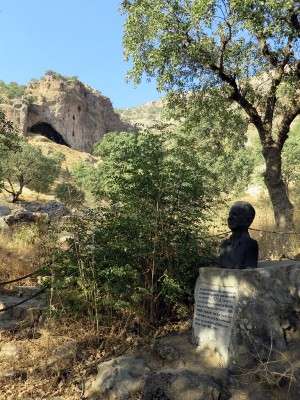 Figure 1. Looking north to Shanidar Cave; bust of Ralph Solecki in the foreground (photograph by G. Barker).
Click to enlarge 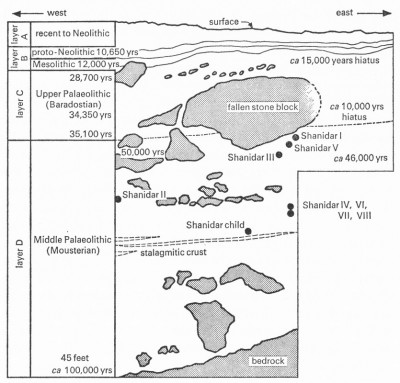 Figure 2. Schematic cross section of the Solecki excavation, showing his major cultural layers, the key radiocarbon dates and the relative positions of the Neanderthals (reproduced with kind permission of Ralph Solecki).

In his 14m-deep trench, Solecki located several Neanderthal burials, including an elderly individual with evidence of severe disability (Trinkhaus 1983) and another, argued by Leroi-Gourhan (1975) to have been buried with flowers. Four major cultural phases were defined from the artefacts (Figure 2) and a chronology was derived using radiocarbon: D: non-Levallois Mousterian associated with the Neanderthals (˃45ka); C: Baradostian Upper Palaeolithic, a regional variant of the Aurignacian techno-complex (33–27ka); B2: Zarzian, a late Pleistocene industry (approximately 12ka); B1: a proto-Neolithic cemetery (11ka); A: Holocene activity (from approximately 7ka).

In 2011, the Kurdistan Regional Government approached Graeme Barker about further work at Shanidar. The resulting project aims to contribute to major debates about Neanderthal societies in south-west Asia and their vulnerability or resilience to climatic change in comparison with Homo sapiens, while specific objectives are to establish a high resolution environmental and cultural record, and to re-investigate the Neanderthal burials, their chronology, context and contents. Initial fieldwork during summer 2014 was interrupted by the IS threat, but two phases of excavation were undertaken in 2015.

The excavations—a 4 × 4m eastern extension of Solecki’s main trench—are focused on the location at which the earlier fieldwork discovered most of the Neanderthal remains (Figure 3). The removal of backfill has exposed approximately 10m of section in this area and the adjacent faces of the main trench to a depth of 4m (Figure 4). The sediments result from shallow wash, mud and debris flows, roof fall and aeolian deposition. Sedimentary and diagenetic processes, vegetation and climatic history are being investigated from sediment and micromorphological samples. 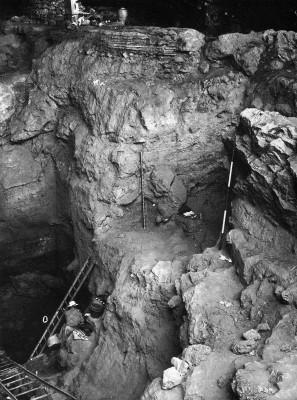 Figure 3. The eastern extension of the Solecki trench in 1960, where most of the Neanderthal remains were found; this area is the main focus of the new excavations (reproduced with kind permission of Ralph Solecki).
Click to enlarge 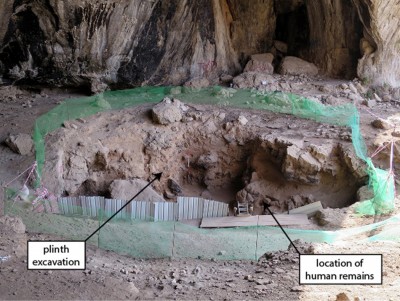 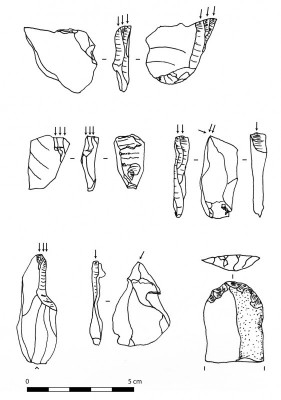 Figure 5. A variety of burins and (bottom right) an endscraper from the sediments of Baradostian age (illustration by T. Reynolds).

An approximately 0.5 × 0.5m plinth of sediment, separating from the main face as a result of post-1960 boulder collapse, was excavated to investigate Baradostian activity (Figure 4). Initial radiocarbon dates by the Oxford Radiocarbon Laboratory place the Baradostian c. 35 000–40 000 years ago. Ephemeral but persistent evidence for human activity is present throughout, with three shallow scoops of ash and charcoal, each around 30cm in diameter and probably used as hearths (cooking places). The size of these features suggests limited groups of individuals. An insubstantial assemblage of lithics from Baradostian layers indicates an attempt to maximise the use of available raw materials, mainly river pebbles, with frequent small cores and core shatter fragments, and core edge-trimming flakes. The frequency of multiple burins implies that the retooling of hunting equipment may have been significant (Figure 5). The amount of burnt bone present in the highly fragmented faunal assemblage could indicate its use as fuel, which is consistent with initial pollen work that suggests a steppeland environment. The emerging picture is of small groups making regular short-term visits for shelter and tool maintenance in extreme conditions. 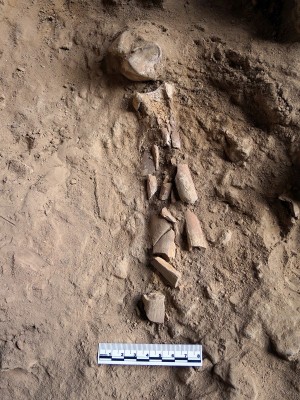 Around the findspot of the Neanderthal individual—Shanidar V—discovered by Solecki, we have found further Neanderthal remains including a hamate, the distal ends of the right tibia and fibula, and some articulated ankle bones, scattered fragments of two vertebrae, a rib and long bone fragments. The tibia and fibula were in articulation with the ankle bones (Figure 6) and lay, foot uppermost, on an approximately 45ᵒ slope. These elements are missing from the list presented by Trinkhaus (1983), making it probable that they belong to Shanidar V, although a new individual cannot be ruled out. An animal burrow truncated the area where the rest of the foot would have been, but some scattered phalange fragments were recovered. The surrounding sediments showed no sign of a grave cut. The lack of a visible cut, the orientation of the anatomical elements and disturbance by animal burrowing all closely match Solecki’s observations (1971: 238–42). There is a notable absence of worked lithics around the bones or, indeed, from any of the exposed pre-Baradostian sediments. This contrasts with the amount of material published from the Mousterian (Skinner 1965; Akazawa 1975), but it should be noted that a further 9m of deposit lies beneath the level reached by the new excavations.

The new fieldwork at Shanidar is undertaken with the permission of the Kurdistan Directorate of Antiquities, which is warmly thanked, as is the Leverhulme Foundation for its financial support.

First published in:
Issue 348, Volume 89
Other Project Gallery articles from this issue:
Material culture and social history: an archaeological approach to the recent past in Turkana, northern Kenya
Early urban archaeology in Southeast Asia: the first evidence for a Pyu habitation site at Sri Ksetra, Myanmar
The origins of food production in the southern Caucasus: excavations at Hacı Elamxanlı Tepe, Azerbaijan
Integrating archaeology and palaeoecology to understand Jê landscapes in southern Brazil
Quick Response Codes in archaeology and their social impact
Subsistence, technology and resource use in Neolithic Orkney at the Ness of Brodgar
Digital recolourisation and the effects of light on Neo-Assyrian reliefs
Behind sealed doors: unravelling abandonment dynamics at the Byzantine site of Shivta in the Negev Desert
Search the Project Gallery