Wandlebury, or Gogmagog, is a flat-topped hill some 8km south-east of Cambridge in the parish of Stapleford. It was an ancient British hill fort, with ramparts and ditches enclosing a plateau. This article considers the evidence for the two giant figures that were reported to have been cut into the chalk at Wandlebury at different times, and for the figure of a goddess traced by Cambridge archaeologist T.C. Lethbridge in 1954, and excavated in 1955–1956; all of which are now covered over or obliterated.

This was almost certainly the figure described (in Latin) by Bishop Joseph Hall in Mundus alter et idem (c. 1605). The translation of this volume by John Healey (1609) describes the figure as “of an incredible height of body; not like him whose picture the Schollars of Cambridge goe to see at Gogmagog hills” (Healey 1937 c. 1609]: 39). Further, this figure was mentioned by John Layer in 1640, who declared

I could never learn how these hills came to be called Gogmagog hills, unless it were from a […] portraiture of a giant wch the Schollars of Cambridge cut upon the Turf […] within the said trench, and not unlikely might call it Gogmagog, which I have seen but is now of late discontinued (Layer c.1640: 66).

When Bishop Hall described the figure in 1605, Wandlebury had long been a centre for sports, which became known as the Gogmagog Olympics. In 1574, the vice-chancellor of Cambridge University banned scholars from attending these games (Cooper 1843: 321). This evidently did not discourage students, as the references to their attendance by Hall and Layer reveal. Simonds D’Ewes visited the games in 1620:

Soon after the Commencement ‘a famous bull’ arrived in Cambridge, and rumour soon spread that ‘he is to be baited at Hogmagog hills, and that all such exercises as bowling, running, jumping, shooting, and wrestling are to be practised there for a month or six weeks, under the designation of the Olympic games’ (Marsden 1843: 109).

In the centre of the games’ arena, on the plateau of the hill, was carved the figure of a giant, probably as an allusion to Hercules, the mythical founder of the ancient Greek games.

No mention of the giant has been found for the years between 1640 and 1722. The figure must, however, have been scoured periodically thus enabling Dale to see it in 1722 and again in 1729, when he wrote “in the middle of the Area is cut out the form of a Giant whom the tradition call Hogmagog” (Dale 1722–1738: fo 11v). When he returned in 1730, he found that “The way heare used to be over the Hill, but uppon building a fine new brick house near the Stables that road is put by”, and a notice had been set up stating “that the Road over the Hill is shut up by Order of His Majesties Writ” (Dale 1722–1738 fo 12v). The owner of the new house was Francis, second Earl of Godolphin (1678–1766). As well as re-routing the road around his new estate, he also laid out a garden on the area formerly used for the games; we do not know how long the giant figure survived after this.

The giant figure that presided over the Gogmagog Olympics on the plateau of Wandlebury Hill was never visible from a distance. There are, however, references to a giant figure on the slopes of Wandlebury that could be seen from the village of Sawston, which is located 3km to the south-west. Samuel Cowles, a Cambridge museum assistant, whom Lethbridge met in 1925, told him that when a child he had known an old man who claimed that when he was a boy the figure of a giant was still visible. According to Lethbridge, Guy Maynard, curator of the Saffron Walden Museum, passed similar reports to Cambridge archaeologist Miles Burkitt (Lethbridge 1957: 6–7). Cowles also told his story of the Wandlebury figure to another Cambridge antiquary, Louis Cobbett.

Following up this account, Lethbridge probed and excavated on the south-west slope of Wandlebury in 1954, claiming to have located a goddess in a horse-drawn chariot. Writing to Lethbridge about this discovery in 1954, Cobbett enthused “I am thrilled! I always believed Sammy Cowles’s story” (Cobbett 1954).

Lethbridge was so fired by the goddess figure, which he believed he had discovered and which he subsequently excavated (Figure 1)—but which scholarly opinion dismissed in 1957 as natural features, plough marks and holes left by uprooted trees (CBA 1957)—that he paid little attention to an outline which he had detected to the right: a warrior with a weapon raised above his head (Figure 2). Only the top half of the figure was traceable, as undergrowth had by then obscured the lower half. 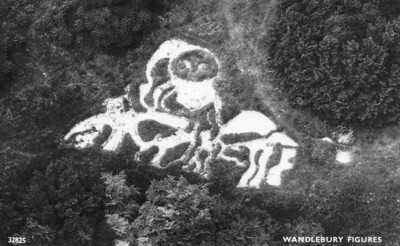 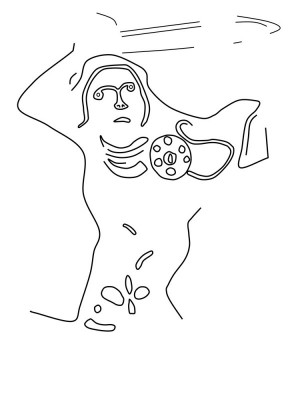 Figure 2. Sketch of the warrior figure, adapted from Lethbridge (1957: fig. 5).
Click to enlarge 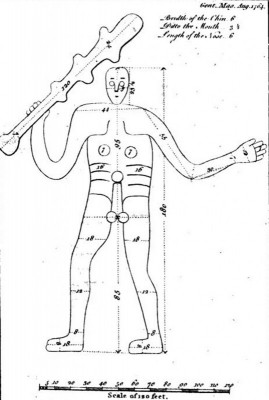 Assuming this warrior figure to be that seen by the old man who spoke to Cowles, the question posed is when might this second figure have been created? It was probably after Dale’s death in 1739; Dale last visited Cambridge in 1738, passing Wandlebury, and he does not mention a new giant. An interesting possibility is that it was carved in 1765, just before Godolphin’s death. In August 1764 the Gentleman’s Magazine published an account of the Cerne Abbas giant in Dorset, with an engraving and measurements (Figure 3). When Godolphin wrote his will, he made bequests to his servants at Gogmagog House, including £20 to David Nutting, his “under butler and Engineer” (Clark 1985: 34). No other servant had such an extraordinary description. Could Nutting have engineered the new giant for Godolphin, using the Gentleman’s Magazine engraving and measurements as his inspiration? Lethbridge gave the height of the upper half of the warrior figure detected in 1954 as 100 feet (30.48m), which was approximately the measurement of the top half of the giant in the Gentleman’s Magazine engraving of the Cerne Abbas figure.

Lethbridge estimated that the giant figure could have been seen from Sawston as late as 1850. In this belief, he certainly erred. Cowles was born in 1863. If we assume that he met an old man of 80 in 1870, the man would have been born in 1790, and would recall seeing the figure between 1795 and 1800. A belt of trees between Wandlebury and Sawston is shown on the 1812 Stapleford Inclosure map (Stapleford 1812; Figure 4). Bill Clark, Warden of Wandlebury, 1973–1998, reported tree-ring evidence, taken in 1976, that indicates that the trees were planted c. 1795 (Clark 2013: 302). Hence, Cowles’ informant could have seen the figure from Sawston c. 1800, but the subsequent growth of the trees would have obstructed the view long before 1850.

One might hope that some reference to the giant will one day be unearthed in a late eighteenth-century traveller’s letter or journal, as yet undiscovered.