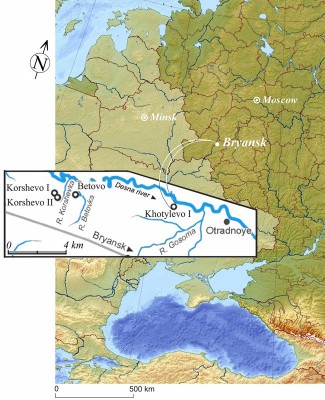 Figure 1. Location of Khotylevo 1 and other Middle Paleolithic sites (open circles) of the Upper Desna region.

Khotylevo 1, situated on the right bank of the River Desna some 10km north-west of Bryansk (N53o25', E34o07'; Figure 1) is one of the northernmost Middle Palaeolithic (MP) sites in Europe and one of the richest in Eastern Europe. Excavated in the 1960s by F.M. Zavernyaev from the Bryansk Regional Museum, the site yielded thousands of flint artefacts, including numerous bifacial tools associated with a number of stratified contexts (Zavernyaev 1978). The chronology and depositional history of these contexts, however, remained unclear. As a result, in 2009, the Institute for the History of Material Culture of the Russian Academy of Sciences resumed fieldwork at Khotylevo 1 and neighbouring MP sites (Betovo and Korshevo). Following publication of the project’s preliminary results (Ocherednoi et al. 2014), we have obtained important new evidence for Khotylevo 1, including AMS radiocarbon dates and some highly diagnostic flint tools, shedding important light on both the age and nature of the MP assemblages.

The site extends about 800m along the River Desna, and current fieldwork is concentrated in the upstream section. Trench 6-2, representing an extension of Zavernyaev’s excavation area 6, exposed the left bank of a ravine, which cuts one of the promontories overlooking the floodplain (Figure 2). Trench 3, situated 50m east of Trench 6-2, was cut into the northern end of the same promontory. Each trench has revealed a series of four MP cultural horizons separated by archaeologically sterile strata. By the end of the 2013 excavation season, Trench 6-2 had exposed cultural horizons (1 and 2) extending across an area of 24m2, and Trench 3 exposed 4m2 of culture-bearing deposits. Neither faunal remains nor any structures have been found, but both trenches have yielded hundreds of flint artefacts (not counting tiny chips and flakes obtained by water sieving) as well as numerous charcoals with clear provenience. 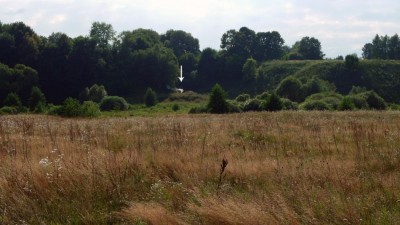 Figure 2. Khotylevo 1, trench 6-2, view from the north (from the Desna floodplain).
Click to enlarge 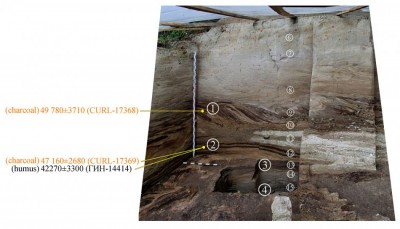 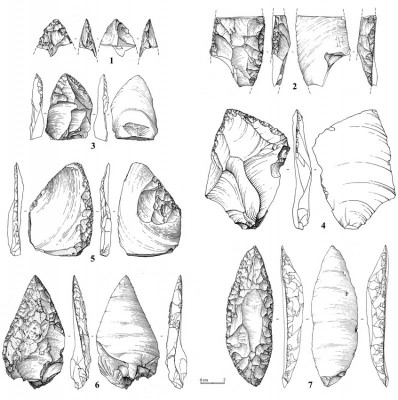 For the time being, Khotylevo 1 is one of only two radiocarbon-dated pre-Upper Palaeolithic sites on the Russian plain (the other is Shlyakh, see Nehoroshev & Vishnyatsky 2000). Two new AMS radiocarbon dates were obtained on charcoals from cultural horizons 1 and 2 of Trench 6-2: 49 780±3710 (CURL-17368) and 47 160±2680 (CURL-17369), respectively. Given the large standard deviation, these dates seem broadly comparable to the previously published conventional radiocarbon date of 42 270±3300 (GIN-14414) obtained on humus (Figure 3). The dates are reversed but, again, the standard deviations overlap, and taken together they confirm our previous conclusion (based mainly on palaeomagnetic, lithological and stratigraphic data) that the deposits enclosing the MP assemblages at Khotylevo 1 should be dated to the first half of OIS 3 (Ocherednoi et al. 2014) and not to OIS 4 or 5 or still earlier times, as had been the general previous opinion.

The industry of cultural horizon 1, uncovered in Trench 6-2 and associated with a buried soil deformed by slope and cryoturbation processes, is by far the best in terms of quantity and quality of the four cultural horizons recognised. In addition to half a dozen typologically distinct cores and 63 blanks, it contained 16 retouched tools, many of which are of textbook quality (Figures 4 and 5a & b). Cores are mainly on tabular pieces of flint, have one or two striking platforms and parallel or bipolar dorsal scar patterns. Blanks are dominated by flakes, but there are also 10 blades and even one bladelet. More than a third of the identifiable platforms are prepared, with the dihedral and faceted butts being approximately equal in numbers. Tools include a distal tip of a biface (Figure 4, no. 1 and Figure 5c), double (Figure 4, no. 2) and convergent (Figure 4, nos. 3 & 4) sidescrapers, a debitage-backed unifacial knife/sidescraper combined with a truncated-faceted element (Figure 4, no. 5), a retouched Mousterian point (Figure 4, no. 6 and Figure 5b), a canonical limace (Figure 4, no. 7 and Figure 5a), a number of irregularly retouched pieces, and three flakes with standardised notches (c. 10mm long and 2mm deep) created by small retouch. Similar notches are also found in most other horizons (e.g. Figure 6, no. 8). 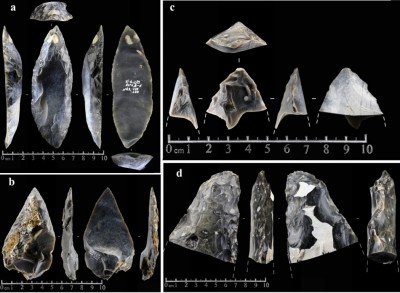 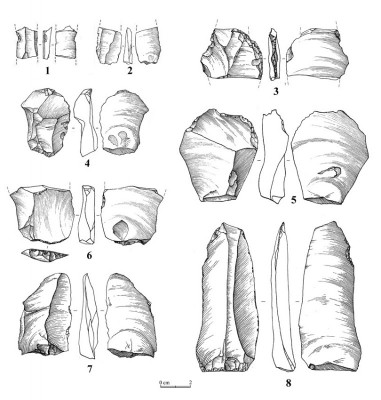 Among the finds from Trench 3 worthy of special note are two objects from cultural horizon 3: an endscraper on a flake (Figure 6, no. 4) and a fragment of a large bifacial tool (Figure 5d) identical to those from Zavernyaev’s ‘Acheulo-Mousterian’ assemblage (Zavernyaev 1978: tabs. XXV & XXVI).

The presence of bifacial tools in different layers and excavation areas of Khotylevo 1 points to the Micoquian affinities of the corresponding assemblages. Since all the known human bones associated with the Micoquian belong to Neanderthals, this can be taken as an indirect, but reliable, indication that the Khotylevo industries were the product of Neanderthals.

The fieldwork at Khotylevo 1 will be continued in future seasons; we also plan to extend this work to include other important Micoquian sites of the Russian Plain, such as Sukhaya Mechetka (Stalingradskaya).

The research was supported by the Russian Foundation for Basic Research (projects 11-06-00380a and 14-06-00139a) and the Institute for the History of Material Culture at the RAS. We are also highly indebted to John Hoffecker (University of Colorado) for his invaluable assistance with obtaining AMS dates.