The archaeology of the Rub’ al-Khali desert in Dhofar, southern Oman, is virtually unknown. The exception is a number of lithic scatters on interdunal gravels and at the edges of ancient palaeolakes recorded by geological surveyors in the early 1970s (Pullar 1974). These assemblages have been the fodder for considerable debate. Initially misclassified as North African Aterian (McClure 1994) and Levantine Pre-Pottery Neolithic (e.g. Dreschler 2007), recent work has shown that they belong to the ‘Nejd Leptolithic’ tradition, a local facies dated to between c. 13 000 and 7000 years ago (Hilbert et al. 2012; Charpentier & Crassard 2013). During winter 2012, the Ministry of Heritage and Culture in Oman commissioned an expedition to Ramlat Fasad, near the modern village of al-Hashman in the southern Rub’ al-Khali, Governorate of Dhofar, to further assess the temporal and geographical extent of past human habitation in this region. 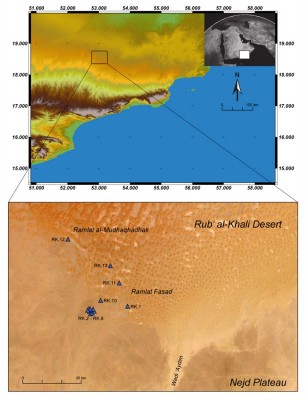 Figure 1. Map of place names and findspots in the southern Rub’ al-Khali desert.

To identify areas for investigation, ASTER thermal emissivity data were analysed to discern potential chert outcrops from the carbonate, benthic and/or quartzitic landscape signatures. In addition, given the previous reports of lithic artefacts found around ancient lake deposits, we used Google Earth to locate interdunal flats that may have been palaeolakes. The survey was carried out via targeted reconnaissance of these specific high potential loci. Findspots were sampled in different ways depending on the density of artefacts: in toto (total collection of a discrete scatter), selected diagnostic (a small sample of diagnostic pieces), or intensive random (a random collection of diagnostic and non-diagnostic artefacts).

Ten new prehistoric findspots were mapped during the 2012 survey (Figure 1, RK.1–RK.10), and an additional three surface scatters (RK.11–RK.13) were discovered by a 2013 British Exploring Society expedition further to the north in Ramlat al-Mudhaqhadhak, which were sampled and brought to the authors for analysis. Of these findspots, 10 were situated on the distal extent of an ancient alluvial fan superimposed by sparse low dunes (Table 1). The remaining sites were found at the edges of small interdunal flats, called shuquq, which still receive occasional ponding from surface runoff, and may have been playa lakes during Late Pleistocene and Early Holocene wet phases. 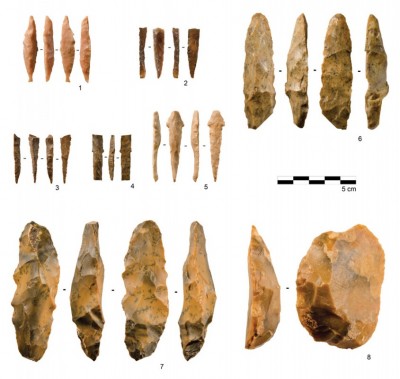 The lithic scatters are typically diffuse and low density (<5 artefacts per square metre), with the exception of RK.13, which yielded a moderately high density of tools and debitage. Many of the findspots are palimpsests, with artefacts from several time periods represented: pressure-flaked Neolithic arrowheads (Figure 2), cores and laminar debitage characteristic of the South Arabian Late Palaeolithic (Figure 3), diagnostic Nubian Levallois cores and points (Figure 4), ‘Sibakhan’ blades (Figure 5), and classic Acheulean handaxes associated with centripetal cores (Figure 6). 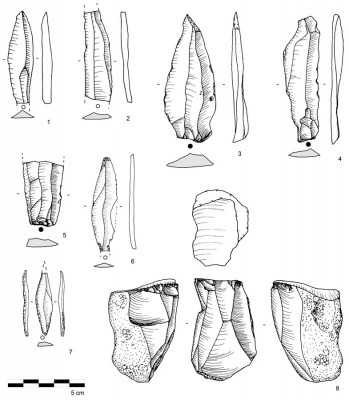 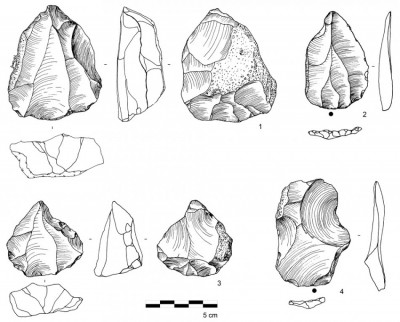 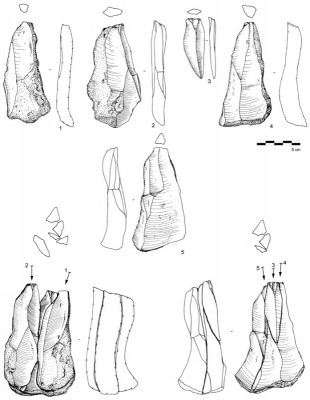 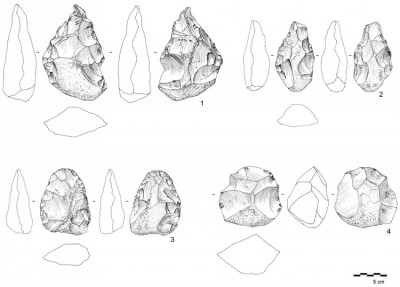 Given the myriad prehistoric sites distributed across the Nejd plateau in southern Oman (Payne & Hawkins 1963; Pullar 1974; Zarins 2001; Whalen et al. 2002; Rose 2006; Hilbert et al. 2012; Usik et al. 2013), it is not surprising to find many of these elements extending into the southern Rub’ al-Khali. In particular, Middle Palaeolithic Nubian Complex and Late Palaeolithic Nejd Leptolithic scatters are common throughout most of southern Oman. On the other hand, the discovery of Acheulean handaxes is unexpected, as is the presence of large, heavily weathered ‘Sibakhan’ blades—an industry found in both southern and central Oman (Rose 2006) that falls chronologically between Acheulean and Dhofar Nubian Complex industries (Hilbert et al. in prep.). Such sites are rare and have only been found on the northern Nejd, now extending into the Rub’ al-Khali. For much of human prehistory, apparently, the Empty Quarter of Arabia was not so empty.

We are grateful to members of the 2012 Dhofar Archaeological Project, including A. Marks, V. Usik, R. Crassard and V. Charpentier, as well as to C. Galletti for producing the thermal emissivity maps. We thank the members of the British Exploring Society expedition, in particular S. Redshaw and L. Ball, for sharing their findings. This research was funded by a grant from the UK Arts & Humanities Research Council and carried out under the auspices of the Ministry of Heritage and Culture in Oman.